Property sales in March, as measured by the number of sale contracts deposited at Land Registry offices, hit a 14-year high according to figures released by the Department of Lands and Surveys.

With the exception of Nicosia, sales rose in all districts with the highest number of sales recorded in Limassol, followed by Nicosia, Paphos, Larnaca and Famagusta.

The future of the Cyprus real estate market is unpredictable. Rising inflation and increasing fuel prices have resulted in an approximate 10% hike in construction costs in recent months. Travel costs and the general cost of living and have risen, all of which adds up to make Cyprus less affordable.

Annual inflation currently stands at a 26-year high of 7.1% and interest rates are  expected to rise.

The impact of Vladimir Putin’s invasion of Ukraine on the market.

Speaking to the Cyprus News Agency the Chairman of the Real Estate Registration Council Marinos Kynageirou said “Many companies based in Ukraine and Russia are moving their staff to Cyprus, resulting in increased demand for housing units, especially in Limassol, a phenomenon that is expected to continue in the coming months.”

(Two days ago the video gaming company Wargaming, which is headquartered in Nicosia, announced its decision to leave Russia and Belarus.)

Antonis Louizou noted that “It is too early to say for sure to what extent the Cypriot real estate market will be affected by the war in Ukraine.”

Looking at each segment of the market in turn:

Although domestic sales in March saw an overall rise of 6% compared to March 2021, sales in Famagusta, Nicosia and Paphos fell. These falls are probably due to the conclusion of the subsidised purchases through the government scheme at the end of 2021.

The scheme provided an interest subsidy of 1.5% for a period of four years for loans not exceeding €400,000 for house purchases. As it takes 2 or 3 months to process applications for the scheme, it’s possible that we may also see falls in Larnaca and Limassol.

It’s also worth bearing in mind that the figures include an unreported number of ‘non-sale’ agreements such as loan restructurings, recoveries and debt-to-asset swaps agreed between the banks and defaulting borrowers. Unfortunately, the Department of Lands & Surveys doesn’t record these separately.

The highest number of sales was recorded in Limassol, followed by Nicosia, Larnaca, Paphos and Famagusta.

Property sales to foreigners (non-Cypriots) performed well with sales up 105% compared to March 2021 with sales rising in all districts with the exception of Nicosia.

The interest shown by foreigners in buying their ‘home in the sun’ has increased following the Cyprus government’s decision to relax COVID restrictions, which now allows travellers who have been fully vaccinated or recently recovered from COVID to enter the country without any further testing on their arrival.

Sales to EU nationals performed well with sales up 104% compared to March 2021 with sales rising in all districts with the exception of Nicosia, where the number of sales was unchanged.

Although sales to non-EU Nationals rose by 106% compared to March 2021, sales in Nicosia and Famagusta sell for the second consecutive month.

The largest number of sales were recorded in Limassol, followed by Paphos, Larnaca, Nicosia and Famagusta. 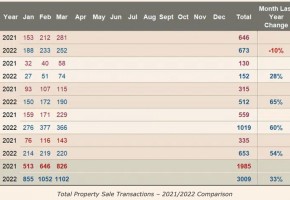 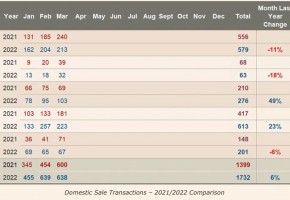 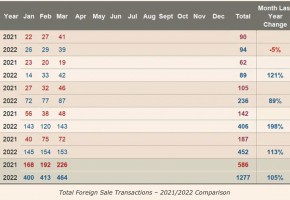 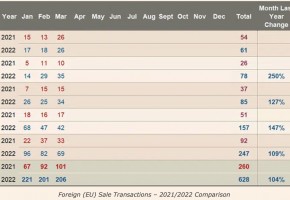 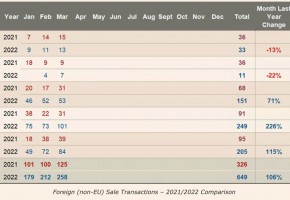 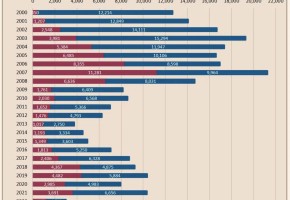 Christos Nikolaou is the founder and Managing Director of Property Canvas, he holds a license as an Estate Agent from the Association of Real Estate Agents of Cyprus and he is a registered Property Valuer in the Technical and Scientific Chamber of Cyprus (ETEK). He is the author of our “Property sales hit 14-year high” and is a certified advance negotiator.

GET IN TOUCH FOR A FREE CONSULTATION